I found delicious Chantarelles, an edible and much-sought-after mushroom, three days in a row without even trying. 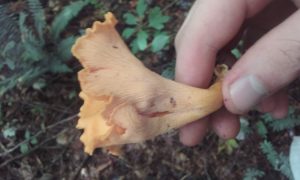 Remember, don’t eat mushrooms unless you have been helped by an expert. When in doubt, throw it out, unless you are trying to earn karma by undergoing a very painful gastrointestinal experience.

Anyway, chantarelles are a very tasty mushroom that can last an entire week in your fridge, which is good because I found 3 lbs of it. They are known as the Queen of the Forest, and I think I might use either that or “chantarelles” as a name for a character someday. They can be made into stews or a creamy pasta sauce. Like most shrooms, they must be cooked first.

Chantarelles grow on the ground, not on wood. 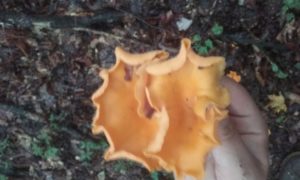 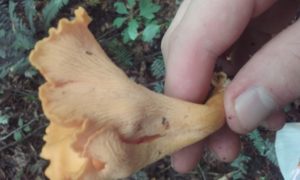 They have false gills that are simply a fold in the main structure of the mushroom, not a separate reproductive part of it. Often the gills criss-cross. A luxurious earthy apricot smell is released when you get enough of them together. 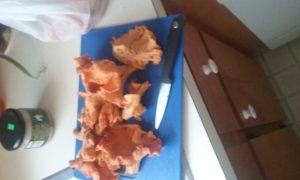 Their scariest lookalike is the Jack-o-lantern fungus, which grows in clusters but has a similar color and gill pattern. (Though with the lookalike, these gills are true gills that can be picked off the stem). This mushroom will make you very sick, though it won’t kill you.

If I was a fringe hiker, I’d probably have to eat this half-rotted Chicken of the Woods fungus: 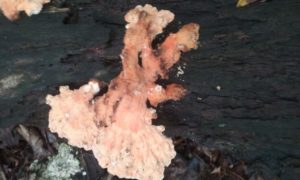